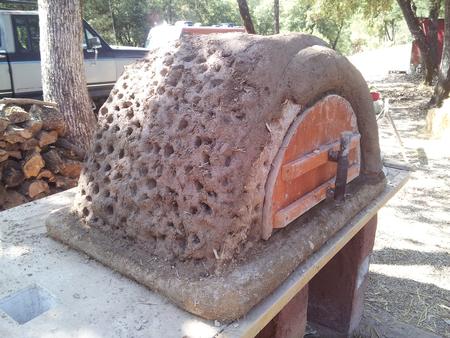 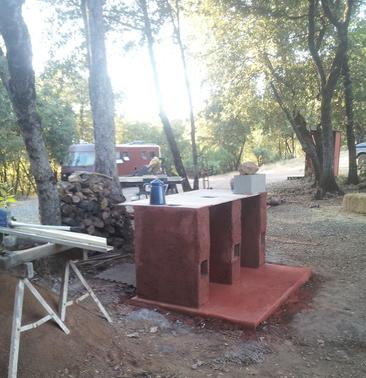 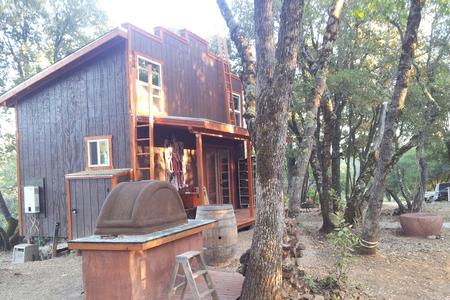 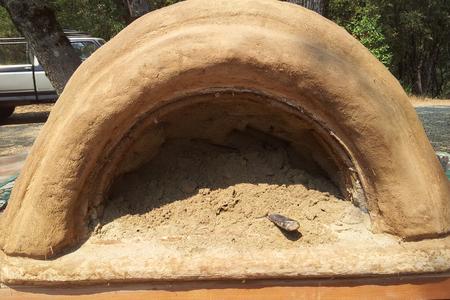 This project took a few months,

and came out great!

Poured and leveled concrete mixed with a terre cotta coloring. 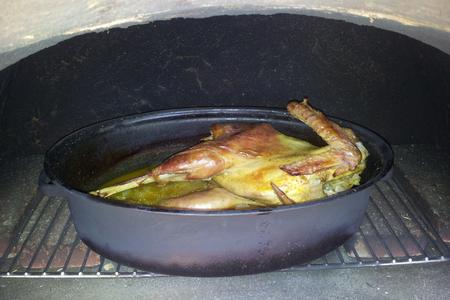 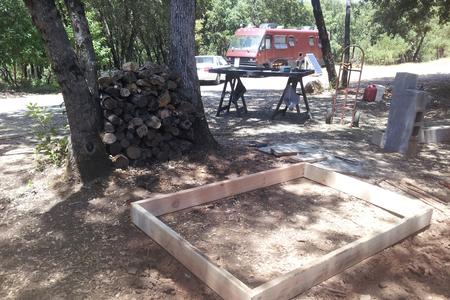 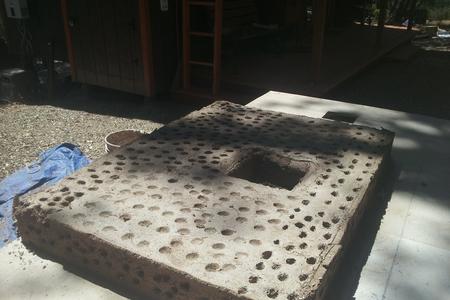 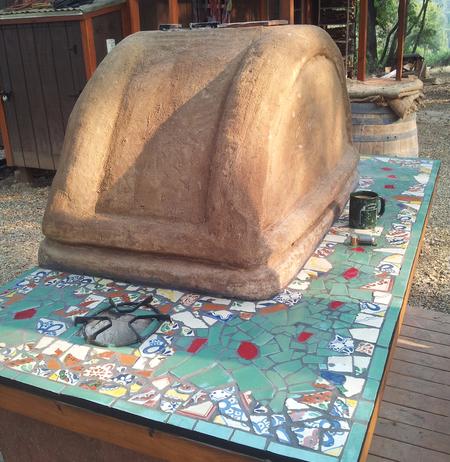 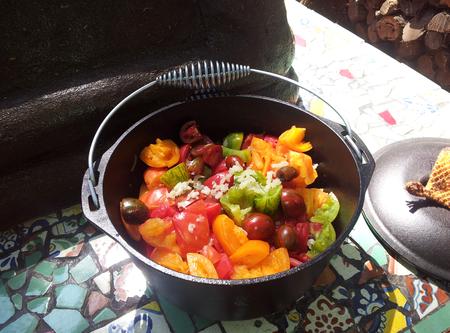 Using a digging bar, shovel and my hands, I removed the top soil (to be saved for gardening later), then dug out and separated large rocks from the clay soil mixed with gravel. 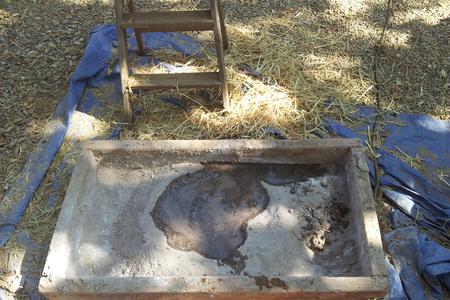 Started this project by building a foundation form. Marked it's perimeter on the ground and started digging.re. 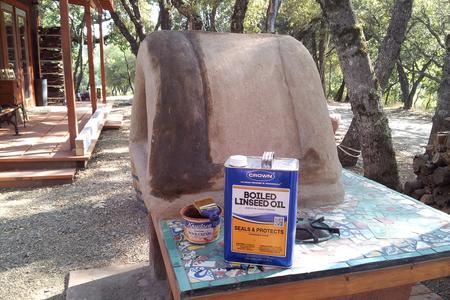 Once final layer of cob dried, I soaked it with many coats of boiled linseed oil, inside and out, for water proofing.

As more oil is applied, the oven gets darker. Eventually it becomes dark brown with a glossy finish.

First time firing the oven I cooked a chicken from our own flock. I learned how to raise, dispatch, clean and cook my own birds.

Screened this mix through two sizes of screen till the fine clay soil is separated from the gravel..

Here's how I built my cob oven / rocket stove. For those not familiar with this technology, cob is a mixture of clay, sand, straw and water. An oven made from this material is a very efficient way of cooking with wood. The extremely high interior temperatures and near-magical cooking properties of a cob oven are due to the fact that cob ovens cook food using all three forms of heat transfer:

1 radiation from the walls and roof

The rocket stove part of this project is an L shaped burn chamber that uses small cuttings of wood by burning them in the horizontal chamber, sucking in air and burning up through the vertical chamber in a way that efficiently burns all particulate matter so that there is no smoke.

While waiting for cob to dry, I did mosaic with broken, Mexican tile on the stove top. 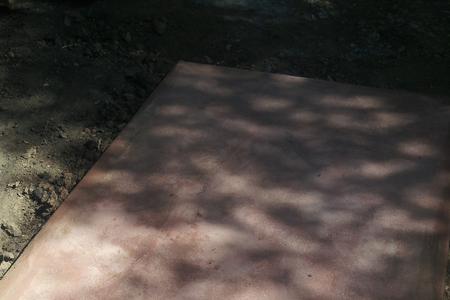 While waiting for the oven base to dry, I built the oven door. Now, I won't bore you with all the details, but this picture is the last of three experimental designs that failed. In the end, I settled on a wooden door made of 2x6 doug fir. The handle is made from a manzanita branch. The wooden door gets soaked in water over night before cooking. This keeps the door from burning and evaporates moisture into the oven while cooking.

Build the form for the floor of the oven. Porcupine the top with screws so the cob will be locked into the stove top.

Set up base for rocket stoves. Ok... this was my first mistake. Trying to use materials I had on hand, I used cinderblock to form the rocket stoves. The holes in the blocks connect in an L shape to form the burn chambers. Early tests proved this to be a viable design. Later research (at a point in the project to late to turn back), uncovered a problem. Cinderblocks break down under the kind of heat produced by the rocket stove. SHIT!

To mitigate this a bit, I layered the inside of the burn chambers with cob material mixed with lime and covered that with stucco. This should keep some heat off the cinderblock, but did make my burn chambers a bit smaller. As of now the structure seems fine. No cracking yet, but time will tell. In the future, I would build the stoves with fire brick.

Before filling cinderblock voids to the top with cement I built a countertop with fire proof cement board. Porcupined it with screws and center it into the cinderblock's setting cement, then cut holes in top for rocket stove burn chambers. 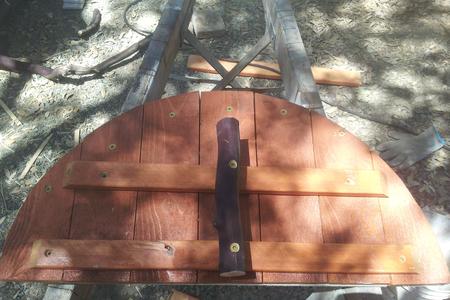 Use wet sand to build the form for the oven wall. 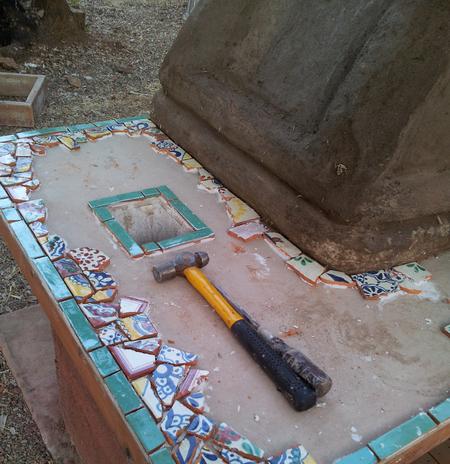 Last layers of cob are dry and tile is done.

Leveled the foundation form, filled with gravel and wired together some rebar for strength. . 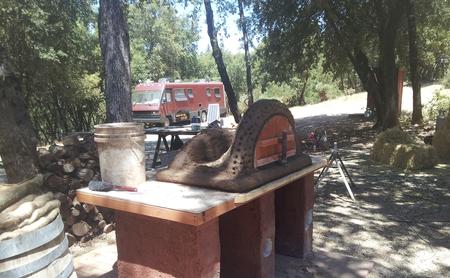 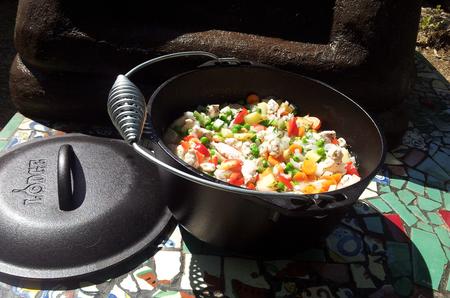 Use door to build up an arch and build up the back wall of the oven.

This is a very old technology called oilcloth. It works great, lasts for many years, looks better than those plastic tarps. Also, plastic tarps break down and leave shredded plastic all over your property and then go to the dump. The oil cloth will  last years before it needs to be re-oiled and eventually will compost when its worn out. 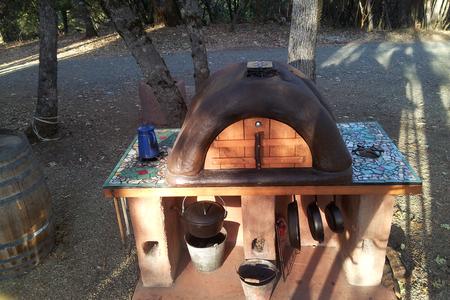 Also while waiting for the oven base to dry, I built a little deck for the backside of the oven, creating a little place to sit and eat.

Cover sand with wet news paper then start applying cob in layers. In this case, it was many layers over many weeks allowing for drying. 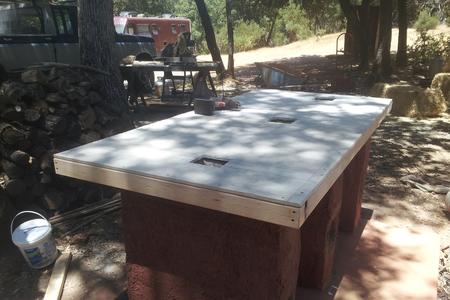 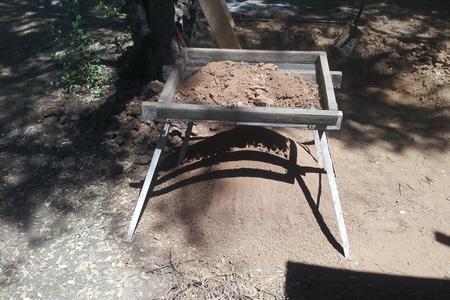 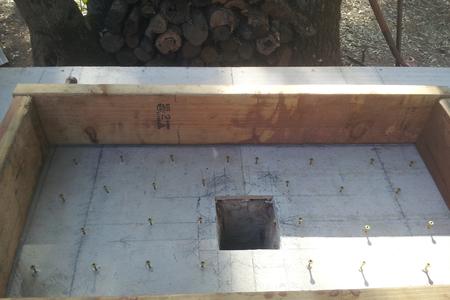 Mixed cob material. I used a mixture of fine clay (harvested from digging out the foundation) for cement and thermal mass, sand for aggregate, vermiculite for insulation, lime for water resistance, straw for binding and insulation and water. 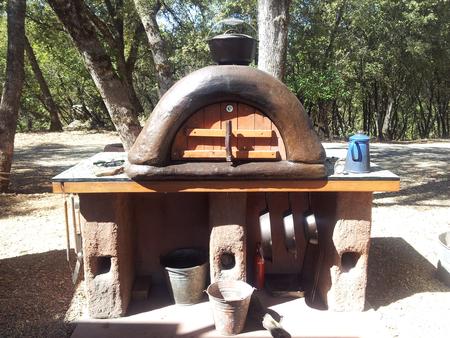 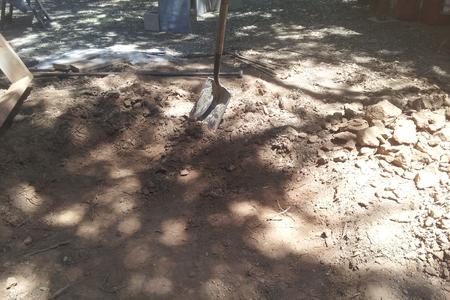 To keep the whole thing protected from the elements I painted a large canvas with boiled linseed oil. 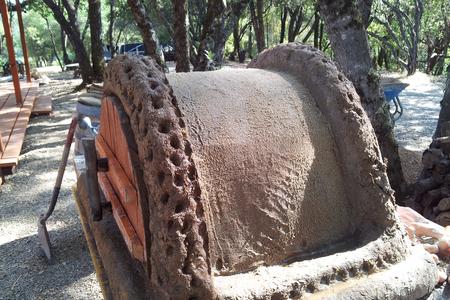 We've also cooked tri tip, pizzas, pies, bread and many pots of coffee and tea. Unpictured is the new fire brick oven floor and the new oven door. I may add these photos later 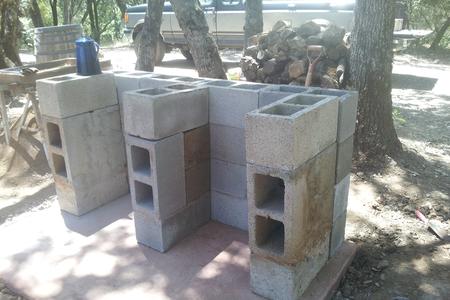 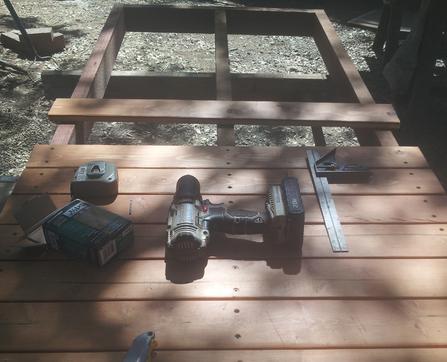 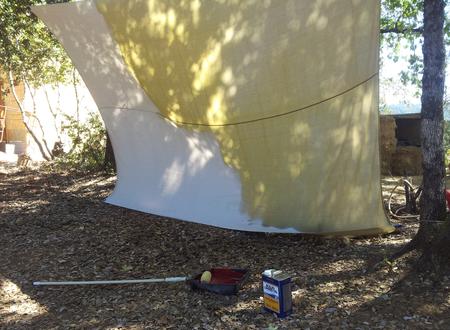 Filled the form with cob, pushed holes in material with thumbs and let dry a week or so before removing the form. The holes lock in the next layers like Lego bricks. 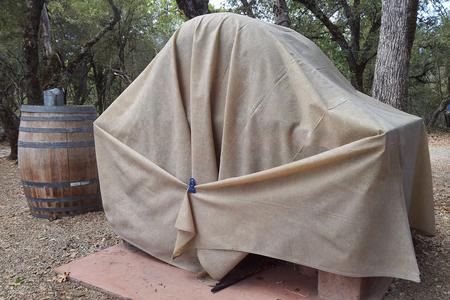